Around 6 am we awoke half frozen as our generator had quit around 04:30. I started the CV and let it run on diesel providing us the heat we desperately needed for another 3 hours. What I would learn on this trip is that Anthony wouldn’t get out of the comfort and warmth of the Coleman sleeping bag unless he absolutely had to climb out. Daylight broke around 09:30 and we escaped the comfort of the warmth to take some pics, potty au naturale and brush our teeth. It was only a short trip up the road to our next stop, the Myvatn Geysirs and hot springs. The putrid scent of ‘smelly farts’ permeated the frigid air causing Anthony to nearly throw up. I was fine. I grew up with the smell of sulfur coming through our pipes from our well water in Nashville, TN.

From there with Anthony seated comfortably behind the wheel, a la Del Griffith, we headed across the street in our CV, up snow covered roads to try to peer into a volcano pit. Here is where life took an interesting twist. Del, I mean Anthony, cracking his knuckles and clearing his nasal passages, turned our front tires into about 8 inches of snow that hid about one half inch of ice. In case you are clueless as to what this means, we were stuck. And badly. He blames me for this. And to be fair, he might be correct. Far away from any road where it would be easy to retrieve help from passers by we had to dig out on our own. But with what? This is where McGyver would be proud of us. Scrounging through the CV we could only find a bread cutting knife, a butcher knife and tools for replacing a blown tire. Oh, and a 12 inch long, 6 inch wide green cutting board which I intelligently, or lack thereof, would have serve as our support for finding grip for a tire. I failed to mention, the CV was a front wheel drive. So with two front tires buried in eight inches of snow unable to gain any traction and with all the weight of the vehicle loaded on top of those tires, we were properly f***ed (a.k.a., screwed, fubar, S.O.L, etc.)! After picking away ice with these knives for about 30 minutes – not the type of day I was expecting on my birthday – I began to believe that I would go out of this world on the same day 43 years later that I came into it. And based upon my actual delivery time my mom tells me, almost to the hour central standard time. But never one to give up and with my knees near frost bite, fingers numb under their gloves and my face beginning to go expressionless like Nancy Pelosi’s after her botched cosmetic surgeries, I finally found gravel. Hallelujah!

Leaving my side to check on Anthony’s progress we needed a bit more chiseling behind that tire. I took over and about 5 minutes later I hit gravel there. Here is where we could have really used the cutting board but it it had shot forward and was buried under 8 inches of snow from an earlier attempt before we found gravel. A slight panic took over me that if we couldn’t free ourselves at this juncture then our lives were surely going to end clinging to a Pringle’s can, stuffed in a Coleman sleeping bag in the back of a CV, near the lip of a volcano. I climbed behind the wheel, slapped her in reverse, revved the engine and hit the accelerator. We were free!  Thank God! After marveling at our brilliance of getting ourselves out with what feeble utensils we had at our disposal, Anthony and I gave each other a gentle “glad to be alive” hug, laughed for second at the peril we must escaped and then were headed back to the open road to continue eastward.

After this grueling and exhausting dig out, we needed to refuel. Now, with Neal Page firmly in the drivers seat (for what would be the remainder of our road trip) we pulled off the road and found a picnic table near more Icelandic horses to relax with and enjoy the -10 Celcius weather as we dined on Pringle’s and PB&J. From there, the day’s stretch of frozen road seemed like what Mar’s landscape must have looked like when troglodytes were hibernating deep inside our frozen sphere billions of years ago, or 6,000 years to the creationists. Randomly, along this drive we would be greeted with a picturesque river of frozen stalactite cliffs of ice stretching themselves for the running waters as if they wanted a first hand experience of the frigid rapids that would await them should they let go of their comfortable home. Happening upon such a river we saw an Audi that had found itself into a similar situation as Anthony had just 3 hours earlier. Only this car had found itself closer to being on 3 wheels and about a foot deeper. We pulled along side and introduced ourselves. Guido and Tom were all smiles as they realized they wouldn’t die alone on this lonely stretch of highway. Pulling the CV onto a side road, we walked back to their location but unfortunately could do nothing to help them. Given we had two bent knives and a scarred for life cutting board, we were SOL at offering them a helping hand. They understood and had no hard feelings about it. About the time we arrived at the bridge to snap some photos, a local chap pulled up in his Landcruiser to help. The struggle was real, but after a few attempts he succeeded in freeing them from their demise.

Moral of these ‘getting stuck’ stories? Asians seem to be much better drivers on Iceland’s roads than the English and the Dutch apparently. Wish I could say differently. So disregard my stereotype from earlier and apply it to European white 30/40’somethings.

After they were saved, Guido and Tom pulled their car near our CV and we made fast friends. In fact, check out their IG accounts as they are fantastic photographers (@ditchieslife and @trex.photography). I stayed in communication with them for the rest of our trip and saw some of their amazing pictures. Driving off, Anthony and I had polished off another can of Pringle’s. Arriving into the next town, which was about 15 km’s away, and adding fuel to the gas tank, we were at least three hours from Hofn. I would need more fuel as well. So another PB&J found its way into my stomach.

We learned that Route 1 was closed for about a 70km stretch so we diverted to route 92. “Thank you” to the nameless gentleman at the N1 who helped us avoid catastrophe. Knowing Anthony would have preferred to just ‘give it a try’ we were lucky we didn’t end up like we had hours earlier. But running out of daylight quickly we pressed onward on the only route we could. We made it into Hofn and found a not so quaint little harbor to call home for the night. With the snow falling fast Anthony got out the stove, dropped some chicken and beef Ramen noodles into the pot of water and set it to boil. Looking forward to something different than bread and chips, as well as a cup of hot tea, we proceeded to nearly torch the inside of the van as Anthony switched canisters as the original one had run out of gas. As the flames hit the ceiling of the van, we were lucky that the shag carpet (sarcasm, sort of) that lined the interior didn’t catch fire. We looked at each other for about 2 seconds wondering which one of us would open the door and which one would throw the stove out into the cold in case this got out of hand. Within a few seconds the flames had subsided as Anthony hastily disconnected the canister from its pilot. Apparently, our CV had more than 2 lives that day as we had slipped the surly bonds of frozen death 9 hours earlier atop a volcano and then avoided a back draft fire chamber as the night concluded.

Having learned to not start the generator two hours before we needed it and to then not turn it to full blast so that it would expire inside of four hours, we slept cozily through the night. And after not dying on my birthday, a cozy, warm and long nights sleep was much warranted. 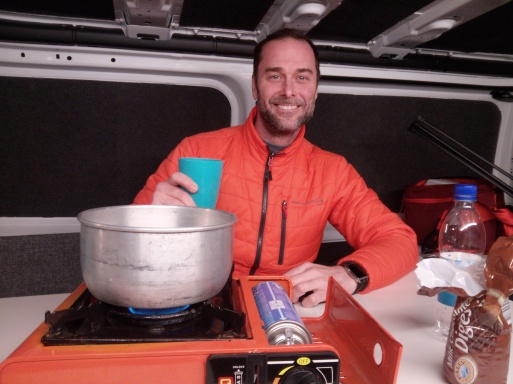 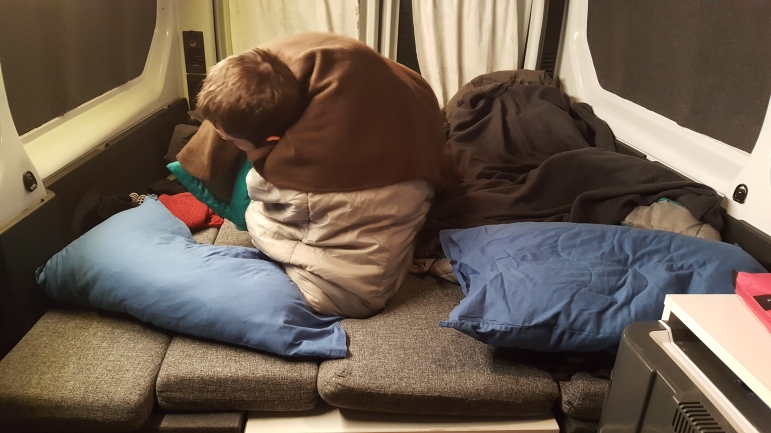 Just moments before the stove went up in flames, I was enjoying some hot tea and getting ready for Ramen

After a day of mishaps it’s lucky for us and our vehicle that we didn’t turn out like Del Griffith and Neal Page in Planes, Trains, and Automobiles… 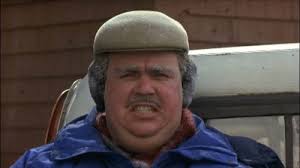 One thought on “Dying On My Birthday?”