On January 11, 2016, I awoke and as usual when I am home in Atlanta, I meandered downstairs to brew a cup of coffee, say good morning to my dad comfortable in his recliner and to pet my dog, Tucker. Earlier that morning, Tucker came back from his morning walk with my dad and unbeknownst to my him, he tore into a bag of dog food and ate to his heart’s content. He had done this once before and was sick for a couple of days, but it passed harmlessly, minus some diarrhea and throw up. My morning and afternoon consisted of my routine of trading stock options but with an intense focus as the market was in free fall. Not paying much attention to him during the day, I took him out for his evening walk and noticed he was really lagging. Breathing heavy and laboring to move more than a slow walk, I went to kneel down and noticed how bloated his stomach was. We kept going and he made it back to the house but hadn’t done much to expel what wrestled inside him. His love of eating would become his final nemesis. I knew at any time he would become sick. He didn’t until the next day.

The saddest part and what still pains me with regret to this day is that, knowing his stomach would soon regurgitate what ailed him, I forced him to sleep outside that night. In the cold. Knowing if he threw up in the house, he would make an incredible mess and my mom, despite her insistence that he could sleep in the laundry room, I knew she would take issue with how bad the mess was even though I would be the one to clean up the storm. I’ve never regretted anything more in my life than to force the one helpless thing you care for most to sleep in the cold. He had to be wondering what it was he did wrong to be punished like this. My heart broke as I stared out at him blankets draped over his back, hidden from his view, as he looked at the doggie door and puzzled as to why his nose wouldn’t go thru this time. He looked confused, bewildered, cold.

At about 5:30 AM, a nightmare that Tucker was trying to jump to me in a parking garage awoke me from what already was a restless dozing. Unsure how we had gotten separated, I was a couple of floors below him looking up at him. He leaped toward me to save him. He disappeared into the darkness never coming close to having me catch him. I hurried downstairs and got him off the patio. But rather than letting him remain in the warmth of the laundry room I would put him in the garage. It was warmer there but where if he made a mess it could easily be cleaned up. Going back to bed I rested a bit easier but still with guilt.

Later that morning I got up but Tucker didn’t feel like going on a walk. The rest of the day he slumbered. Remaining in the backyard, moving further and further away from the house. I spent the morning and afternoon day trading. And losing. Badly. My mom looked out the window once and said, “Derek, Tucker doesn’t seem like he is doing good. You should go check on him.” I responded aggravatingly, “Mom, he has done this once before. He just needs to poop it out and throw up.” I did go out and check on him near the rear of the yard along the fence. His breathing rapid and shallow. I pet him for several minutes, his head barely lifting from the ground to look at me. The sun lowered, the darkness came and Tucker would move closer to the house as the chill air set in. He made his way up onto the patio where I went outside to pet him and reached out to my veterinarian pal, Andy. Tucker and I had a vet appointment already scheduled for the next day and I would try to see if he could make it until then to have him checked. Andy offered his ER clinic’s services should I need them.

At about 7:30 pm, I researched his symptoms to see what may be wrong and read about heart failure. But he had never had any history of it and his vet in Santa Monica never mentioned anything about it. I felt his tongue. Cold. His gums, pasty. I tried to feed him some honey which was one of the recommendations. Knowing something was clearly wrong, I called an ER Vet hospital closer to my parents house. They said to bring him in and they would be ready for him. I put his bed in the backseat, carried him outside and we hurriedly drove the 10 minutes to the hospital. Repeatedly, I would peer into the backseat at him and say, “Hold on buddy. Hold on. We will be there in a minute.” As we pulled into the parking lot I heard scratching on the door. I began to really tear up. Parking right in front I ran over to his side and opened the back door, his head dangling into the floor board. I picked him up to place him over my shoulder. His eyes caught mine for a second and then the life left him.

The doctors grabbed him out of my arms and asked if they are allowed to do CPR to which I replied, “do whatever you need to do, whatever it takes.” Tears streaming down my face, the heaviness in the back of my throat, the doctor entered the exam room where I waited and told me he was gone before they could have done anything to save him. Heart failure they said. I was just a few minutes late. I broke. Calling my parents to tell them, they were in disbelief their sadness and heartbreak palpable. My mom would drive up to be with me.

The nurse asked if I wanted to spend a few minutes with him. My sister-in-law would call me to ask if she should help handle the arrangements of his cremation. The next 60 minutes or so I spent with him were the hardest of my life. Harder than my divorce. Probably because I had Tucker during the divorce and his ability to make me smile, laugh out loud and his love carried me through that low point. Tucker was my ex-wife’s dog when we met. But he was instantly mine. The three of us all knew it as Tucker took to me immediately. It’s almost like he was my soul mate as any dog owner with an incredible attachment to their four-legged friend can attest to. And in that instance, all the previous 9+ years, from June 2006 through December 2015, would overwhelm me. The sadness, the pain, the sorrow and heartbreak, as well as the laughter, joy, happiness of daily high-fives and unconditional love rolled all into one, that was gone. Forever.

Tucker was my crutch. My rock. My soul. He depended on my as much as I depended on him. We would speak to each other through a mock yawning each morning and afternoon before his walks. My favorite part of any day was our morning walks together. Everyone who met him loved him and would comment to me that ‘I wish my dog was as good as Tucker is.’ The homeless men and women at Reed Park in Santa Monica looked forward to petting him each day. My upstairs neighbor cried hard when she heard the news. As did my next door neighbor. Tucker had a way of sucking you into his soul, the bountiful and abundant love he had for each person. But always focused on me.

Tucker, it was one helluva road we ventured together. Forgive me for how it ended. You deserved better and I carry that regret every day. I love you Tucker bear and as I write this from where you spent your final days, know that I am reminded each day here of what I should have done to extend your life. There is no guaranty he would have lived had I been 10 minutes or hours earlier in getting him to the vet. But the not knowing will haunt me forever. However, in a way, he knew I wanted at some point, to travel alone around the world as I will beginning in just four days. Bringing him to Atlanta was a trial run to see how he would cope with a huge backyard, endless chasing of squirrels and copious amount of time in the shade. Perhaps his actions, I want to believe, were his way of saying, “Daddy, I don’t want to hold you back to travel yet I don’t want you to leave. So it’s for you that I let you go because I know you would never go on this journey you need because you would never let go of us. I do this for you. I love you.”

Tucker helped guide my two best friends and I across 3k KM of Indian terrain in a TukTuk (see pic below of him painted on our Rickshaw) this past April. Now, I leave in four days to go on the journey Tucker didn’t want to hold me back from. I love you buddy and you will be with me every step of the way. High Five! Good boy! 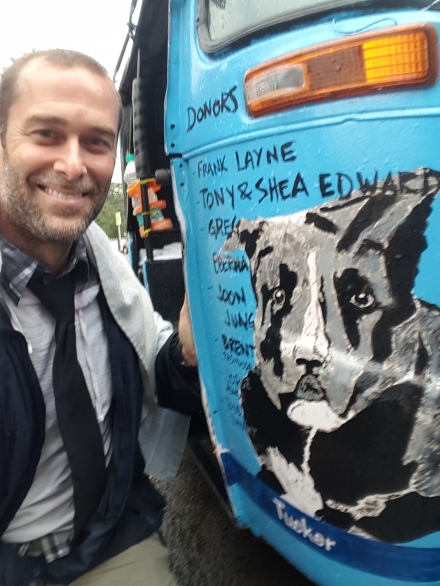